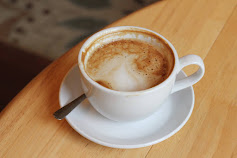 Do you ever have a morning that just seems to follow a theme? That one little thing—an image, an idea or a remnant from last night’s dream—turns you into an antenna with only one frequency. The law of attraction not only lays similarly themed breadcrumbs in your path but drops them like Acme pianos in a Warner Brothers cartoon. Aided by your human compulsion to connect dots, the universe screams to get your attention. If such synchronicity doesn't demand a quick essay after morning coffee, I don’t know what does.

It should be noted that said coffee was partaken on the newly re-opened patio of my local coffee shop, surrounded by mask wearing yuppies and hipsters scrolling away madly on smartphones or devices in complete silence. Oh, now and then, a nervous mutt would pipe up at a passing car or the masked stranger that had remained perfectly oblivious to its owner on approach. But otherwise, all was perfectly…disconnected. Ever part of the problem and not the solution, I myself had just contributed to a Facebook comment thread, in a manner to rival War and Peace or the Gideon Bible. What can I say? I type fast. I’d shared a soul-cleansing GIF depicting a strong, able-bodied man who resembled a sumo wrestler stopping to help another gentleman in an airport. The elder of the two hobbled on a single crutch, struggling to mount a formidable flight of stairs while lugging a roll along suitcase. Without a second thought, the gentle giant hoisted the man on his back, took hold of the suitcase handle so that his passenger might have a free hand to hold on, and made quick work of the rest of the stairs. Afterward, a quick, chivalrous nod and both went on their way.

A fellow artist from the Philippines had commented that while heartwarming, he could not see such an act occurring in his home country. When I asked why, he cited that ‘jumping on another’s back’ would not fly in the more reserved milieu. In the discussion that ensued, I mentioned that I’d once read an essay on ‘cultural shyness’, most prevalent in eastern societies. I then went on to distinguish stilted self-expression from the more admirable reserve, prudence and modesty that seems to have gone the way of the Dodo. I may have gone on to posit that the current state of all entitlement, all the time in Western Judeo/Christian culture had arguably been birthed in the humanism of the Renaissance and the hubris of the Age of Enlightenment, then reinforced by the individualism emblematic of both the French and American Revolutions. I suggested it’s been cemented with capitalism and the manifest destiny of the westward movement. And here we are.

Though I have several FB personalities, I have never been a big fan of food pics or any meme that threatens the poster ‘already knows’ who will repost, and that those who don’t clearly hate puppies and Jesus. In that spirit, my remote Facebook friend and I agreed on what remains elusive in society—a balance between personal liberty and what was once known as consideration. Decorum and class evolved as an acknowledgement of community. Curbing our behaviors out of consideration is a nod to our Interconnectedness.

I glanced down at the book I’d brought along, determined to finish it. Written by a young podcaster who’d had me on as a guest, the book was titled, The Story of Interconnectivity. I greatly admire its author, despite the guilt-by-association of his having been born, by definition, a Millennial. Only vaguely aware of the coincidence, I decided to pack up and head home to read. It wasn’t the nervous dogs distracting me; the unseasonably cold winds were regularly depositing bits of debris in my eyes the size of Mount Everest. I’d continue my reading on the sofa that had couched my ass in familiar comfort over the past year—the calm center of an apocalyptic tornado. First there’d been my year-long, self-imposed isolation due to health issues. The effects of chemotherapy cream alone made me look like Freddie Kruger, reason enough to remain a recluse lest the neighborhood yuppies and hipsters choose to brandish torches or pitchforks on seeing me. Then came the first lockdown of the pandemic. I’d been a freelancer long before my health trials, so the isolation was just an extension of a lifestyle I’d been well immersed in. While many went stir-crazy or lost it facing the dark, cobwebby corners of their minds, I didn’t bat an eye. Black Lives Matter protests and a contentious campaign season further divided us, forging yet more isolation. The insurrection at Capitol Hill, rather than being the final nail in a coffin, served as a reminder that despite hope dawning on the horizon, our cultural shadow of divisiveness was not going away any time soon. And now, this icy wind that sweeps much of our continent, forcing us indoors without running water or electricity. Though I’m far from being a walking almanac, I count this nationwide cold snap among the many things I’ve not seen in my over-half-a-century.

In my essays on the significance of this impasse, I’ve pointed out the prevailing irony: at the precise moment we’ve been forced into isolation—separation—a tiny virus that knows no borders has taught us just how interconnected we are. One needn’t be a conspiracy theorist to recognize that historically, fascist dictators, fearmongers and demagogues use our divides against us, knowing full well power is best usurped from the masses in climates of isolation. Divide and Conquer is the name of the game, as there is power in numbers. In my view, though such tactics are express strategies of certain regimes, not all our current challenges are proffered by The Man.  In our democracy, there is no one villain with a twisty mustache keeping the huddled masses uneducated and preoccupied with materialism as a control tactic, nor stoking the fires of hate in order to divide. Nor even cultivating viruses in petri-dishes for Pharma-profit at government-funded germ warfare labs. The mechanisms of power structure are the logical result of human nature; this is just the way things have panned out. It should be no surprise our institutions have evolved as they have. Nope, no supervillains are stroking cats in swiveling chairs or tying us to the railroad tracks. We are doing it to ourselves.

The thing is, it’s happening for a reason. It may be too convenient to simply say all strife signals change. That things are coming to a head and cultural paradigm shifts are on the horizon. The evolutionary theory that informs sociology posits that any institution, convention, norm or custom that persists serves the proliferation of the species. I would offer that the evolution and transformation of our noosphere—the invisible realm or our ideas, principles, thought forms, beliefs, codes and laws—is no different. The very notion of civilized society relies on this moral realm. The dialectic of world events, in all its pendulum swings, contributes to our survival. To the propagation and proliferation of humanity. Still, what could be the value of isolation and the illusion of separation?

I pondered the question as I began traversing the stretch of sidewalk that would lead me back to my couch, cinching my hoodie about my ear-bud stuffed ears. The podcast that happened to be playing—Bréne Brown on Oprah’s Super Soul Conversations—piped up in my skull. “Suffering always results from isolation,” Brene’ announced, rather cheerfully. “Without belonging and connection—which some would say are the very definition of love—there is only suffering.” So there it was: a year of isolation was meant to make us long for connection. For touch. For belonging. In the way of man’s basest nature, we want what we can’t have and we appreciate what has already flown the coup. Absence makes the heart grow fonder.

As I sipped what remained of my dark roast, I secretly hoped that along with the ushering out of obsolete paradigms that no longer serve us—like the patriarchy that’s led to capitalist greed, imperialism and exploitation—we might begin to rediscover our interconnectedness, and cherish it. The very Individualism on which our country was founded—the personal liberty, equality and freedom with which we identify and so value, is precisely what has contributed to our isolation. To the dog-eat-dog sense of ‘taking’ that erodes community. Technology—the convenient diversion offered by a cell phone or device that anoints awkwardness at a bus stop or in line for a vaccine, saving us from having to look fellow humans in the eye, also has its price. It erodes collectivism, unity, and any sense of interconnectivity. The very fact that we must now socially distance from our neighbors compounds the equation with suspicion. Long before Covid-19, debates raged the world over between nationalistic policy and globalism.

Ironically, I just finished Deepak Choprah’s audiobook Metahuman. In it, much time was spent dissecting dualism. The chasm between subjective experience and objective reality. The empirical view that consciousness is a biological phenomenon reduces those who view it otherwise as tiny figures in the head seated before an enormous silver screen, believing what is projected on it. It suddenly clicked—the disconnect between metaphysical consciousness and materialism, the rather recent throwing out of the baby with the bathwater I’d often called the grand illusion, meant that the masses, disillusioned with institutionalized religion, no longer honored our roots in consciousness. Let alone collective consciousness. It’s long been said we live in a Godless society. But what clicked is this: the Individualism that founded our country went hand in hand with the trend toward dismissing consciousness altogether. It’s been a steady progression—and something’s got to give.

As an artist, (read: a rebel without a cause) I’ve spent much of my life aware of social conditioning—seeing through the matrix. Questioning the status quo and wishing others would do the same, that they were less like sheep. In the new millennium, I’ve finally gotten my wish: folks are attempting to topple power structures and have begun to question every last institution. The thing is, the masses are not particularly practiced at it. What one gets is a Pandora’s box of conspiracy theories—a cultural paranoia. But it’s exciting and promises change—assuming we can get a handle on fake news and regain trust in our fact-checkers and media.

As always, balance seems to be the answer: cultivating free-thinkers who are not so subversive or contrarian that they become dissonant forces in society—insurrectionists or rogues or homegrown terrorists. Or in the case of a recently-ousted world leader: a cancer that must be excised. With Interconnectedness as a cultural value, we might be able to restore balance, questioning the status quo for the greater good. Keeping our eye on the red road of our capacity and contributing to our collective transformation by engaging creativity. Using our unique gifts to put us a step closer to our human potential.

I’ve really gotta slow down on the coffee.