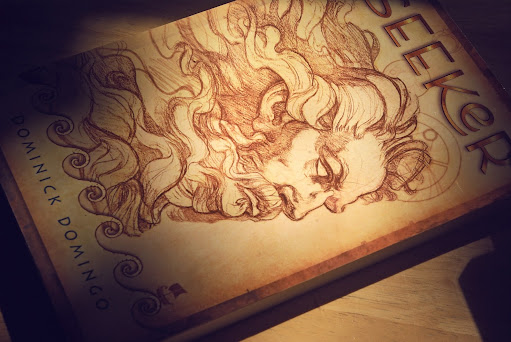 What if all the songs and poems got it wrong and Icarus did not perish when he fell from heaven? What if he was picked up by a passing mariner—a seafaring demigod unaware of his divine heritage? Dominick Domingo's The SEEKER is a genre-blend: Visionary Fiction meets Mythic Fiction. Set in Bronze Age Minoan culture predating classical Greek mythology, its resonant parable speaks to the core of the human condition—our capacity for transformation and renewal!
Follow Dominick Domingo, Author on Twitter: https://twitter.com/DominickDoming1
Learn more about the launch of The Seeker on his author blog: http://dominickdomingofiction.blogspot.com
Posted by dominick at 8:39 PM No comments:

I have regularly joked that as a writer, solitude is a must, so nothing much changed in my life when this pandemic came along. It took me a loooong time to become restless during 'lockdown,' but I eventually did. Wrote this on July 21st:

Parched, buckled asphalt scored with gritty fissures and whitewashed by time heaves moonward, abducted by her pull, splitting and falling away, at last surrendering to gravity.

To remain like chapped urban lips, pursed at a buttermilk sky and taunting the tread of tires.

Of all the things lurking in hidden alleys, today’s glimpse ranks highest—fleshy and diaphanous, catching sun

He brakes, second-hand cherry-red Schwinn grinding to a halt.

The world has yielded nothing familiar, for months—nothing lifegiving—only the promise of more: More withholding, more destitution, the fleeting memory of freedom a shapeless reckoning licking a moonless night, like flames.

Brown muck has settled, clearing the once oppressive silt of sky and promising eternity.

Metal behemoths jet few and far between, assaulting the air with sputtering coughs of the brown muck that once blanketed all, horizon-to-horizon.

It’s all that’s redeeming in this silence.

Nights, absent yuppies and hipsters, coyotes have the run of streets.

No touch, no connectivity, for months—only masks and gloves and distance, suspicion and insurmountable divide.

And if the world without is inept as a prison, his own cells mutiny, render themselves as prone to invaders as a flame to the slightest breeze: a year without touch.

Sinewy arms peeling damp cotton from a lean torso, click with sweat. All efficiency, no excess stored like toilet paper or Handi-wipes.

Quick poem this morning over coffee:

The reflection that dances upon the still, solemn lake

Or the lake itself?

Speak not of the tumbleweed but of the

Invisible force that spirits it across barren earth,

Speak not of the stereo

But of the current that makes it sing

Of the wind that catches a falcon’s wing

Lifting it to flight

Fuels passion and the stubborn drive to persist

The rage and fury that is life